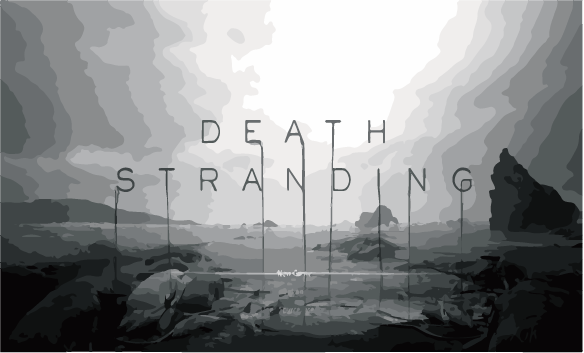 This is a picture of the title screen for the game

Hideo Kojima, creator of the infamous Metal Gear Solid franchise, is back with one of the most anticipated titles of 2019: Death Stranding. The game was released as a Playstation exclusive, meaning that as of right now it is only playable on that platform. However, there are plans to release it on PC in early summer of 2020. It is sold in three editions: standard edition for $59.99, special edition for $69.99, and  the collector’s edition, which cost $199.99. This game is Hideo Kojima’s first attempt at making a game that is not part of the Metal Gear Storyline. In spite of there being hour long gameplay showing off the game before it came out and spoiler filled trailers, it is still a confusing game. Some people see it as a delivery simulator and others see it as the emergence of a totally new genre of gaming.

The game takes place in an alternate future where the world has been destroyed by an event called the Death Stranding, which caused destructive creatures from a realm between life and death to begin roaming the Earth. The Death Stranding was caused by invisible entities called Beach Things, Beach Things create explosions called “void outs” when they absorb dead things by a process called necrosis. These explosions cause rain called “Timefall” that ages and deteriorates whatever it lands on. This damaged the infrastructure of the United States, leading to the rest of the population to stay in isolated places called “KNOTS”. The player controls a character named Sam Porter Bridges, who is a courier. Sam’s job is to navigate through the tattered planet that is now Earth and deliver packages to restore a wireless network in the United States in hopes to reconnect the remaining colonies and a fragmented society. It is possible for Sam to counteract the Beach Things, because he has a mental connection to something called a Bridge Baby, a Bridge Baby is an infant reflecting a state between life and death. Bridge Babies are held in pods simulating a mother’s womb. They make it possible for Sam to sense Beach Things.

As far as gameplay is concerned, Death Stranding is an action game set in an open world environment,  and has online functionality. As players make the coverage of the wireless network bigger, they can acquire maps of areas. The player can also use  blueprints to construct consumable items and structures with a Portable Chiral Constructor, which is like a 3D printer, including ropes, bridges, and power generators used for charging battery-powered equipment. The network is also used for the game’s online function. In the online function, players can leave supplies, structures, and messages that can be seen and used by fellow players, although structures will inevitably be destroyed by Timefall. The player can salvage cargo lost by other players to complete their delivery as well. The player, however, does not directly encounter other players.

At the end of the day, Death Stranding is a very interesting and confusing game. A game that will offer something new and fresh while also maintaining some mechanics borrowed from other games that Hideo Kojima previously made that have nothing to do with this game. Death Stranding will probably take more than one play through to begin to understand and even then, the player will still not really graspit. If people do decide to get the game, it is recommended that they play with patience and do not expect action on every journey.