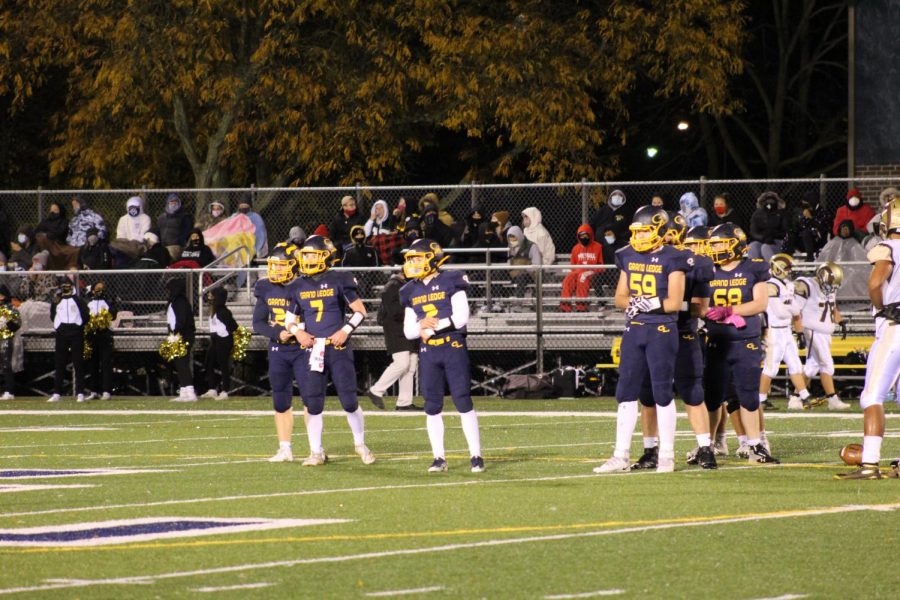 To finish off the 2020 football regular season, Grand Ledge faced the 2-2 Holt Rams. The comets got off to a rough start in the first three drives, coughing up the ball twice, which led to the Rams first touchdown of the game. The tough start continued as the Grand Ledge starting quarterback, Logan Todd, went down with a shoulder injury. Senior quarterback, Noah Warren, replaced Todd and played an outstanding game. Warren sparked the offense on his first drive with a huge 30 yard pass over the middle of the field, and capped the drive off with a 3 yard touchdown run. Warren continued his solid play on defense with an interception on the next drive which took the teams into half tied at 7-7.

Holt opened up the second half with a strong 10 play 60 yard drive making the score 14-7. The Comets came back with a lengthy drive that stalled out in the red zone after a huge second down sack. Following a Grand Ledge missed field goal, the Comet defense was faced with the tough task of keeping the Holt Rams offense out of scoring range. A huge pass deflection on third down led to a punt that pinned coach Bryas offense deep in their own territory.

Starting off the next drive, Grand Ledge came out with a strong running attack that had seemed almost non existent earlier in the game. Another huge throw by Warren kept the drive alive on an important third down. The next play, Warren ran for a 26 yard touchdown that put the Comets down by one. An extremely gutsy call by coach Joe Brya to go for a two point attempt paid off when Warren hit fellow senior, Dillion Pfau, in the corner of the end zone to give the Comets the slight 15-14 edge over the Rams. After a quick stop on defense and a time draining possession, the Rams got the ball back with a minute and a half left in the game. Holt started off the drive with a quick pass that was deflected, leading to a second and ten to keep their hopes at winning the game alive. A game ending interception sealed the deal for the Comets and gave them their fourth win of the season to improve to 4-2.

Grand Ledge’s next matchup is a playoff home game on Friday October 30th at 7pm against Norrix who is 0-6 on the season.