In The Dog House

Gravy and the other facility dogs have been in GLPS buildings for an entire school year! 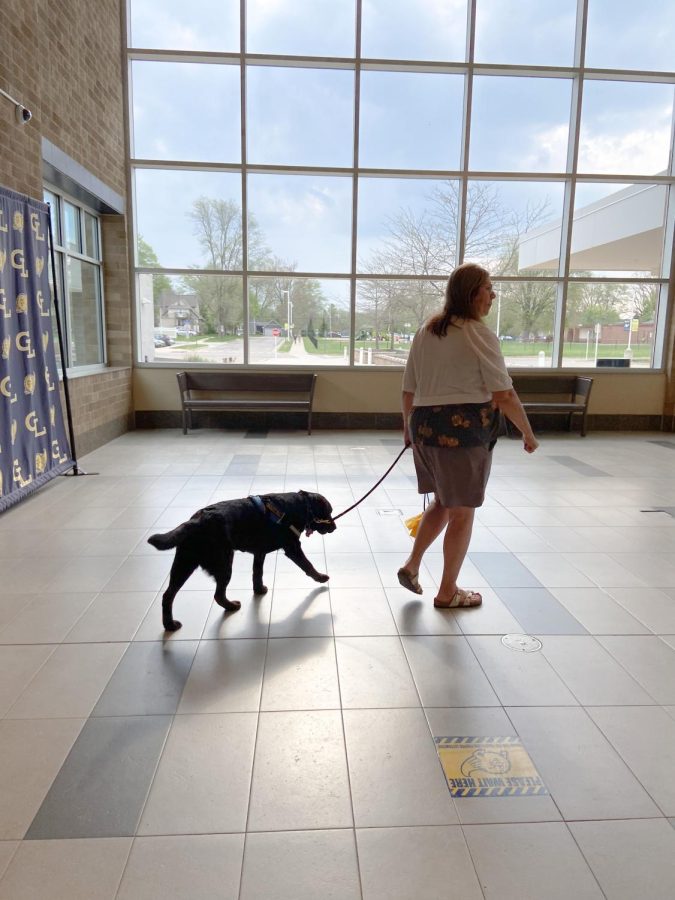 During passing time, Mrs. Capra takes Gravy into the halls to interact with students. Gravy is a fan favorite among GLHS students.

At last, Gravy has been at Grand Ledge High School for an entire school year. How crazy is that? Gravy, GLHS’s facility dog, has left and will continue to leave her mark on the GLHS community.

Over the last several months, students have been able to interact more and more with Gravy. Gravy has been able to visit numerous classrooms and have other staff members walk with her throughout the halls.

In previous articles, it was stated that the addition of the dogs helped students feel more comfortable in the classroom and helped in times of distress. Gravy has also increased students’ socialization, as she is something that many students can bond over together.

Throughout the year, this has held true. Gravy’s presence has also benefited attendance and grades among students. Mrs. Capra, Dean of Students, has also noticed increased positivity and happiness within the school building.

“Gravy has been able to provide comfort and support to students in need in so many different ways that include sitting quietly with a student, joining in small group activities, and recently being able to come into classrooms to enhance the learning environment of a classroom,” Capra stated.

Not only do the students love Gravy, but Gravy herself loves interacting with students and staff. It is very beneficial for Gravy to have social interactions.

“As Gravy’s handler, I have seen her grow and settle into her work assignment so well over these past few months. She loves to come to school and see everyone.” Capra mentioned.

“Each time the bell rings, she gets up from her bed and goes to the door because she knows she will be going out into the halls to visit. Since Gravy was recently fully certified, she has now started to join in classrooms and be with students for their class period. This has given students and staff another option to spend time with her. Something that has gone much better than expected is the overwhelming response I hear from community members about how pleased they are that we now have a facility dog in our building, and often they will then share a personal experience their student has had with Gravy.”

Due to increased socialization with Gravy, students have had the opportunity to interact with each other and share a common interest. With this, students have been able to increase their confidence level around the school. Gravy has also allowed Mrs. Capra to make more connections with students, as she handles Gravy on a daily basis.

“Feedback has been overwhelmingly positive from staff, students, and families. The dogs have had a positive impact on people across the district. We have also helped other districts start the process of launching their own programs,” Assistant Superintendent, William Barnes, stated.

Although the school year is coming to an end, and in a few short weeks, the senior class will be making a departure, Gravy will not. Administration plans on the return of facility dogs next year. The school has become such a positive place since Gravy’s arrival. Thank you, Gravy!