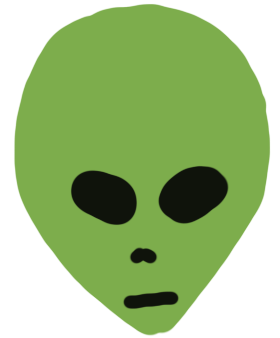 People have believed in aliens since medieval times, and the question of whether they are real or not is sill talked about today. If they look like this, is also up for debate.

The military base in Nevada known as Area 51 has been shrouded in mystery for decades, with multiple reports of unidentified flying objects (UFOs) having been observed by locals around the base since the 1950s. Though the U.S. government has stayed consistent in saying these sightings are just the result of testings done by the U.S. air force, there have also long been skeptics who have questioned the government’s statements. People have tried to find the truth of what really goes on in this high-security military base for as long as it has existed, and on September 20th, 2019, millions of believers decided it was finally time to uncover these mysteries.

The joke that turned into a crusade was created in June of 2019 as a Facebook event titled “Storm Area 51: They Can’t Stop All of Us.” The creator of the event, Matty Roberts, did not expect the gag to blow up as much as it did, but before the event was taken off of Facebook over two million people had already signed up to go. The joke became so widespread that the U.S. air force had to issue a warning to people who were planning to visit the military base. Satirical videos were being made on youtube for various “strategies” on how to raid the base, and several celebrities such as Lizzo and Lil Nas X joined in on the fun by making their own jokes about the event. But as months passed, however, the once-popular movement seemed to fizzle out just like every other trend.

As the hype for the event seemed to die down, some few passionate individuals were still fixated on the idea of going to Area 51, whether it be for the joke or actually wanting to raid the base. The event was now being called “Alienstock,” and was turned into a music festival to celebrate aliens instead of trying to save them. However, some were fearful that the event would turn disastrous, and the creator Roberts decided to move the festival to Las Vegas where the event would go through another name change, it being renamed to “Area 51 Celebration.” Even with the lackluster name change and new location, some supporters of the original event still planned on going to Area 51.

When September 20th finally rolled around, people around the world were watching and waiting for the result of what could possibly be the next humanitarian catastrophe. Fortunately, though, the event did not turn into a bloody battlefield, and no newly freed aliens were seen running around the base after either. Out of the two million people who had originally signed up for the raid, only 1500 of them actually came to Area 51, with some of them having camped out around the area the previous day. Most of the people who came to the event did not even get close to Area 51 itself, due to the path leading up to the base being several miles of rough terrain. The 150 people who did make the trek to the gates of Area 51 did not cause any major harm, with only one person receiving a warning after crossing the gates.

For the people at home who were able to stay up past three am, there were only a few glitchy live streams on Youtube that people could watch, but those videos were only of the people who weren’t at the actual base. The people who had visited the gates of Area 51 later reported that there had been no service at the gate, and therefore were not able to stream what was going on.

Even with the bad video quality and early wake-up call, one Grand Ledge student was still set on watching the event live, that student being  sophomore Mckenna Wischmeyer. On the original Facebook event post, the raid was set to take place from three am to six am. However, due to observers living under many time zones the event took place at several different times, depending on the person’s location.

“I woke up around five o’clock,” Wischmeyer continued. “I always do my homework early in the morning anyways, so it wasn’t so bad.” For most people, waking up this early would be difficult, especially on a Friday morning. But imagining what could happen at the event was enough to keep some people up.

“I didn’t really know what to expect, maybe to see someone brave enough to go inside, or just to see a bunch of idiots.” Wischmeyer said. Unfortunately, the event had been a let down to most people, partially due to the fact that only 1500 people showed up when there were originally supposed to be around two million. But even then, many people still thought the raid had been fun.

“Sure I was disappointed, but it was still a funny experience,” Wischmeyer stated. No aliens were discovered that day, but many people who went to an event reported having fun with all the other raiders. Though no army marched up to Area 51 like many people imagined, the fact that an innocent joke was turned into a real event showed that anything is possible—maybe even aliens.