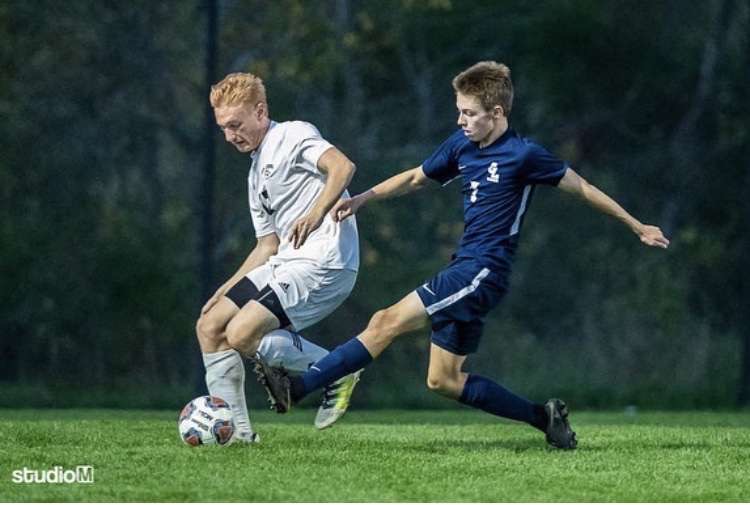 Camden Schuchaskie (right) tries to steal the ball from a defending player. Schuchaskie has recently won the LSJ Athlete of the Week award as member of the Grand Ledge Varsity Soccer team. ( Photo by Marvin Hall/Courtesy Photo)

Camden Schuchaskie (right) tries to steal the ball from a defending player. Schuchaskie has recently won the LSJ Athlete of the Week award as member of the Grand Ledge Varsity Soccer team.

Schuchaskie Kicks it Into High Gear

Student athletes, especially those in high school, dream of receiving some kind of award or trophy for the team or for themselves. In the Lansing area, the Lansing State Journal gives out a weekly award called the High School Athlete of the Week. Grand Ledge students have won this award in the past (too many  to name). What makes this selection special, however, is that people from all over the Lansing area select who should win. One lucky junior at Grand Ledge High School has received the award for being a soccer standout. His name? Camden Schuchaskie.

“I was happy, but I think it was cooler for the team and Grand Ledge as a town to be fully recognized, and being obviously proud of winning” Schuchaskie says.

Schuchaskie has been on the Varsity Soccer team for about two years and has become one of the leading scorers for the team. Earlier this season, he had four goals in a win against Eaton Rapids as well as a hat trick in another win over Waverly. Winning the award has not only helped his confidence, but the total team chemistry as well.

“[The award is] something that the whole team can feel like they’ve won because at the end of the day it’s not just about me. The whole team took pride in it.” Schuchaskie says.

Schuchaskie has some schools looking at him for soccer including Butler, Georgetown, and Valparaiso, but none have taken serious action to try and recruit him yet. After all, Schuchaskie is still a junior and still has a whole season to gain more attention.

Schuchaskie is looking for many different ways to kick into higher gear for his senior season next year. For now, he looks to finish the season strong and bring in a couple of more wins for the team. Students interested in checking out more information about the team can visit the Varsity Soccer Page.

Schuchaskie Kicks it Into High Gear