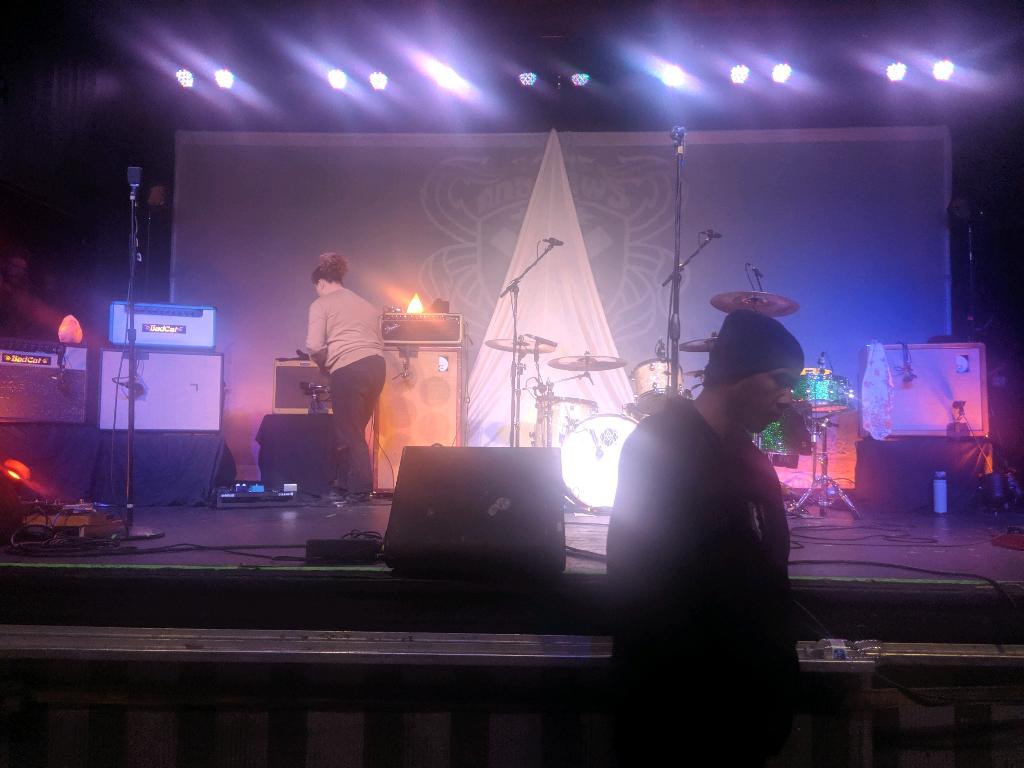 Here, Stage hands are preparing for La Dispute's set. The La Dispute logo can be seen on the bass drum head. (Photo by Eric Moyer)

Here, Stage hands are preparing for La Dispute's set. The La Dispute logo can be seen on the bass drum head.

Cold air bit the skin under my sweater. I was growing impatient, and the company of the two men behind us was becoming less and less distracting.

“What’s the time?” Kenny risked exposing his hand to the cold to check his phone. Eric pulled something out of his pocket. He ate it. It was a cashew.

“Doors open at 7:30?” Eric ate another cashew. Touche Amore seemed to draw a similar crowd. The two fan bases were cut from the same cloth and indistinguishable.

“Yes.” He jutted his hand back into the pocket of his sweatshirt. A lack of coats and an early arrival were vital for good seating, even if it meant bearing the cold city for over an hour.

The trail of concert-goers streamlined into the desolate parking lot of Saint Andrews Hall. Here were people shrouded in dark clothing and riddled with piercings. More were always rolling onto the back of the line, stretching it farther. Men in maybe three layers of jackets waved in cars and accepted handfuls of cash.

In spite of their usually sloven appearance, crowds at La Dispute shows are typically easy to get along with. Most of them are happy to be there and happy that the band – native to Grand Rapids – can find the time to return to their home state.

Touche Amore seemed to draw a similar crowd. The two fan bases were cut from the same cloth and indistinguishable. Many fans, including ourselves, were anticipating that the two bands would play a popular split EP recorded by the both of them (Searching for a Pulse/Worth of the World).

Killing time was easy enough. Two brothers who stood behind us managed to entertain. We would have annoyed people at both ends of the crowd with our laughter if we were to be heard over the ambient noises of Detroit. The sound of drivers getting cut off, people leaving bars. Drunken screaming could be heard in a bus across the street ironically labeled Limousine.

But our random sparks of conversation were suddenly interrupted. A man in many layers of unkempt clothing had walked the line of concert goers, repeating the same question:  “You guys got any money for food?”

Now he had arrived at us.

Eric was generous. He held out his bag of cashews as an offering. The man before us gave an awkward expression of combined confusion and terror. One would have thought Eric had pulled a shrunken head out of his pocket and shoved it in the man’s face.

The man continued down the line, collecting handouts of spare change and dollar bills. Eric ate a cashew.

The whole group of fans were warming up and socializing, now packed shoulder to shoulder in the venue. The three of us stood at the head of the mass with only a thin row of people between us and the barrier. It was difficult not to look back at the sea of people. Heads of long dark hair and beenies bobbed up and down like a field of sunflowers. I realized that my best bet at keeping my own hat would be to squeeze it in my right hand for the entirety of the show.

After half an hour of settling in and establishing our position in the crowd, the feeling had returned to our bodies and the opener was walking on stage. I turned to Kenny.

“Oh.” It didn’t occur to me until that moment that we would have to stand and listen to an opener. “Are they any good?”

“I didn’t hear anything I liked when I listened to them.”

I hoped that Kenny’s intuitions had been faulty or that at the very least they put on a good show. It was possible that I might have to dedicate another half  an hour to standing in the effluvia of people excited by a group that I couldn’t vibe to.

In spite of my premonitions, I would actually find myself standing in the effluvia of people excited by a group that I could vibe to. The two bands had chosen an impressive and unique opening act.

A noise-punk band hailing from Philadelphia, Empath was impressive in all aspects. Kathrine Elicson put out amazing energy on lead vocals and guitar, and drummer Garret Koloski proved himself through his unconventional style of drumming. It would be difficult to find a synth-based punk group with a more enthusiastically uncommon sound.

The following moments were a discordant blur of screaming and jarring noise. I will do my best to describe what happened.

Now Touche Amore was arriving on stage. With the best set I have ever seen performed, the group incited the crowd into a chaotic and shaking mass. Jeremy Holm, the vocalist of the group, jumped from the stage and crossed the barrier to have fans alike join him as he screamed into the microphone.

Touche Amore played new and old songs alike, including a new single called “Deflector.” At one point Jordan Dreyer – vocalist of La Dispute – joined Holm on stage as they played two of the songs featured on their split EP.

Despite the fact that most of the audience were kind and compassionate with their peers, some agents of chaos went overboard with their antics.

Eric was soon lost in the shuffle as men and women alike elbowed their way through the crowd. Kenny and I were separated at one point by a woman who squeezed her way between us. The woman was relentless in giving up her position. The only solution was violent pressure from the two of us. We had to squeeze her from both sides until we could force our way in front of her. Later while stabilizing myself by grabbing the barrier through the row of people in front of us, my hand was elbowed in a repetitive and violent motion by a woman in front of me.

At the end of the set, Holm walked through the swarm of fans and disappeared into the crowd.

After a brief period of recovery, we once again were thrown into the wave of emotional chaos. Dreyer emerged on stage in an alabaster turtleneck and immediately jumped into song.

With such a broad catalog of amazing music, it isn’t difficult for La Dispute to put on a great show. From the heavy and more aggressive Vancouver to the much softer and introspective Panorama, La Dispute has consistently made some of the best music in the Post-Hardcore genre – and it holds up on stage.

It was easy to be hypnotized by La Dispute’s torturous sound. It’s rare to find bands that are so sentimental, but also severe. The cascading drums and guitar riffs compliment Dreyer’s Ciceronian and poetic style of lyricism.

Like Holm, Dreyer was not afraid to engage with his audience. I counted four times where he and I shared the microphone and yelled the lyrics to both popular and unpopular songs by the group.

Throughout their set, La Dispute was not afraid to be diverse instrumentally. At various times, one could count up to three guitarists at once on stage. There was even one point during the song Rhodonite and Grief lead guitarist, Chad Morgan-Sterenberg, even played a solo on a trumpet.

After a long encore, we stumbled away and managed to end up back on the road and out of Detroit.

Kept awake by incessant tinnitus, our 2-hour vigil in the car consisted mostly of rudimentary conversation and trying to process what we had experienced.

I hadn’t expected the show to be as virulent as it was. My body was ravaged. My calves were sore from trying to keep my balance, my sides and right hand ached from the elbows of those around us. My voice was limited to a very small range of notes and my right knee was to pain me for a week. The only thing we had to help with dehydration was a 32-ounce canteen, which didn’t go far between the three of us. The air was acrid with sweat that soaked through our t-shirts.

All I could do with my time was meditate on the events of the night.

For years it has been espoused that rock is dead. Quite honestly, this statement may be true. Rock is no longer one mainstream musical current that draws behind it both pop and counterculture music. After years of rock being the driving force of culture, it has been torn to pieces. And much in the same way that modern Detroit is the debris of industry, Post-Hardcore is the detritus of mainstream rock music.

And reflecting in the back seat of the car, my thoughts painted by physical agony, I realized what happened that night. Maybe, if it was true that Post-Hardcore was the remnants of culturally relevant rock, we were part of the group that had gathered and put ourselves in a situation of intense physical pain just to grasp at these remnants. To experience music in a very raw and emotional form, we had destroyed our bodies and now sat in slow recovery until the next time. 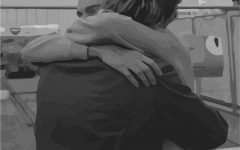 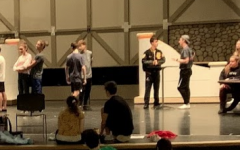 I'm Dreaming of a White Christmas 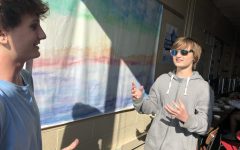 Interview with a Marxist